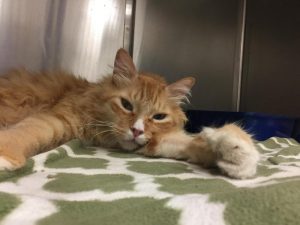 Diabetes mellitus is a condition that develops when the body doesn’t produce enough insulin or the insulin produced isn’t sufficient enough to regulate blood sugar levels.  The pet may also have concurrent illnesses like urinary tract infections and skin infections that have an effect on diabetes.  The most common causes of Diabetes in cats is obesity, pancreatitis and the most common, amyloidosis (auto-immune).

Symptoms of Diabetes For Cats

Cats with diabetes tend to drink a lot of water, urinate frequently and in greater volume, have a ravenous appetite and despite the fact that they’re eating more, can often lose weight.  In some cats, if the disease isn’t diagnosed soon enough a serious condition known as ketoacidosis can develop, and vomiting, diarrhea, dehydration, lethargy, and anorexia can occur.  If you notice the early symptoms, it would be helpful to bring the pet in as soon as possible.  Early diagnosis may help remission rates, especially in cats.  Also, cataracts will form in dogs though rarely in cats.

What Should I Do After A Diabetes Diagnoses For My Cat?

The good news is that diabetes is easy and relatively inexpensive to diagnose.  With a simple blood and urine test, your veterinarian can determine whether there’s an elevated amount of sugar in your pet’s body.  The goals of treatment include the elimination of the clinical signs of diabetes, prevention or slowing of cataract formation and resulting blindness (this is rarely true in cats), prevention of potentially dangerous hypoglycemia (too little sugar in the blood) and prevention and/or treatment of concurrent illness.  Cats, especially, can get stress hypoglycemia from being handled or stressed.

With prompt treatment and early diagnosis, cats can go into remission although that rarely happens in dogs.  Your veterinarian will make recommendations about a proper diet and feeding regimen and start your cat insulin therapy once or twice a day.  There is lots of reliable research that says diets high in carbohydrates, low in fat and high in fiber are helpful in regulating diabetes in dogs.  In cats, they are now suggesting high protein/low carbohydrate diets.  These diets may help in remission of diabetes in cats and are more like the diets of felines in the wild.  The feeding schedule should be coordinated with the onset of the insulin.  This is fairly easy in dogs because they eat only once or twice a day but with cats, it is nearly impossible with cats’ “grazing” habit.  If you have a problem feeding regularly, talk to your doctor about a feeding schedule that will work for the cat’s insulin level and still works for you.  The most important part is to be consistent with the diet.  You will also need to start your cat on insulin therapy once or twice a day although usually twice a day.  This means injections twice a day although people can learn to do this.

Since there are 23.6 million Americans with diabetes, many clients will know someone with the disease and know that they learn to check their blood sugar many times a day if they need it and give themselves insulin injections.  They learned to do it and so can you.  We know one cat owner who says he used to give his mother diabetic injections and now he does it for his older cat.  He says it’s really not that bad and the calmer you are the less the cat (or dog) is upset.

There will be rechecks in the beginning and usually one week later a day stay in the hospital for a glucose curve.  This is to see if the insulin is working correctly or if the dosages need to be tweaked.  The doctor would also like to know what feeding schedule was settled on and any other problems that may have cropped up.  Everyone needs to cooperate on treatment, especially in the beginning.  Once the treatment is working correctly, it should become more routine for you and your cat (or dog).  Also, your pet needs to be weighed if a diet is part of the program. Call us today to schedule an appointment! (818) 846-1166.

There are some apps and websites that might help also: