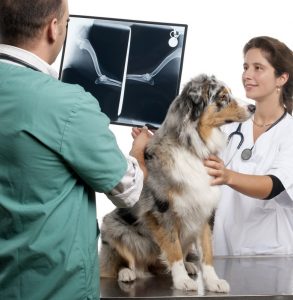 Everyone hates this diagnosis but there are many things that can be done to improve quality of life or prolong it.  Lymphoma is one of the most common malignancies you’ll encounter in a veterinary practice and it happens in both cats and dogs.  It is cancer of the lymphatic system and results from the malignant transformation of lymphocytes, the cells of the lymphatic system.  Lymphoma usually arises from the primary and secondary lymphoid tissues, including the thymus, spleen lymph nodes and gut-associated lymphoid tissues.  The cells are capable of moving through the body though so they can turn up in other places, for example the skin, eye, testis etc.  The doc at Burbank calls them lumps and bumps and they can be more dangerous than you think or they can be benign fatty tissues.  This is why they need to be seen so you can catch a problem at the early stages.  They have not developed a definitive cause for the cancer’s development in dogs although they have made more headway in causes of the cancer in cats.  There seems to be various causes with differing biologic behaviors in dogs.

Dogs and cats are typically presented at the veterinary hospital with the physical presence of a mass by the owner or because of the effect of the cancer on the animal’s body or its’ functions. This is one of many reasons why it is important to bring a pet in regularly for an exam especially if you notice some change in function (even if it doesn’t seem to be bothering your pet) or personality.  If the physical examination doesn’t reveal a tumor but he seems sick, minimum diagnostics should include complete bloodwork but radiographs and ultrasounds could be included.  Unfortunately there is no definitive blood test to say whether or not a pet has cancer.  The best test is cytology by needle aspirate or a biopsy.

some good new alternatives especially with certain kinds of lymphoma.  Most dogs (75% – 90%) will achieve complete remission but eventually relapse.  They can achieve clinically relevant second and third remissions with additional treatment.

Science has made more headway figuring out what causes malignant lymphocyte changes in cats.  In this case, the feline leukemia virus (FeLV) has been identified as a biologic carcinogen.  With the development of FeLV vaccines and removal of VIREMIC cats from the general population, the incidence of this type of lymphoma has been greatly reduced.  There is also good evidence that environmental tobacco smoke acts as a chemical carcinogen which increases the risk for lymphoma in cats.

There hasn’t been as many new treatment options in cats especially because the vaccine has lowered cat cases so dramatically in the last 10 years.  They are usually treated with multiagent chemotherapy also.  In these cases about 60%-70% of cats achieve complete remission although, as with dogs, they relapse pretty soon.  We do have to remember that dogs and cats have a shorter life span then we do so the remission period seems shorter because we compare it to us.

Most dogs and cats receiving therapy are provided with good quality-of-life scores and prolonged survival times.