Dr. Metzger occasionally sees very large soft masses on dogs. These are tumors but of a type that seldom spreads to the liver or lung. They are space occupying fatty growths. In the last year, we have had two cases that were exceptional. One was on a Sheltie that came in weighing 33 pounds and had an 11 pound mass removed. This is the largest percentage of body weight I have ever seen. The other case was a 14 pound mass on an 85 pound Shepard mix.

SHELTIE The owner of the Sheltie had been out of work and had to let the growth go because of lack of funds. We were able to use the Southern California Veterinary Association’s Angel Fund to help pay for the procedure. The fund allows a hospital to get a $500 stipend to help out a person who needs it. The person is asked to pay 10% of the total bill if they can and the hospital discounts the procedure. The Sheltie recovered very nicely and has done well without carrying around another half of dog. You can see how large the mass was in the photograph below and also how well she did post surgery.

SHEPARD The shepard, unfortunately, was older at 14+ years and did well the day of the surgery but then had post op problems and had to undergo a second long surgery. Two weeks later she passed away.

If you see these soft masses growing on you pet, try to get them removed before they become large. It is much easier on the pet, the owner and even the surgeon. If they are in for their routine dental cleaning, for example, and are already under amaesthesia, this would be a great time to get the surgery done. It will mean less anaesthesia for the dog and less expensive bills in the long run. 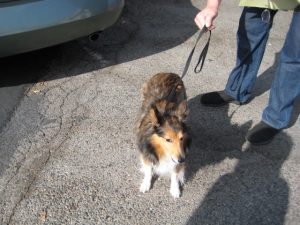