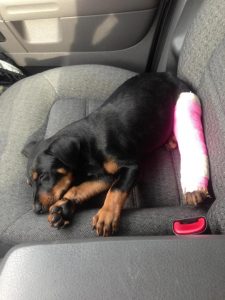 Treatment is sometimes easy and successful and other times it can be a quick failure but we are here to help you get through it.

Here at Rainbow Veterinary Hospital in Burbank we have a dog named Boo who is presented today for a one-inch mass on his wrist. He had another surgery where three masses were removed and one biopsy proved to be malignant (the kind that spreads). We have no recurrence at the sites, but a new mass, at the wrist, is of great concern to the owner and she fears it is malignant also.

The decision is to go to surgery again after we did a cytology which is obtaining some cells with a needle and making slides for the lab. The lab reported it as a fatty mass and the decision is to remove it before it grew any bigger.

While we were in surgery, we found that the growth on the top of the skin was a fatty mass and easily removed but there was another growth underneath it that was firm and attached to the tendons. We removed this by teasing it free from the tendons and vessels in the wrist. The mass was then sent for biopsy and luckily it came back as benign (noninvasive) and everything turned out fine.

We have to deal with tumors every week. They range from simple fatty masses, to ten-inch, three pound masses in the abdomen. Some of the 260 types of tumors are benign (do not spread) and some are malignant (tend to spread to other organs).

We do cytology to find out the type of tumor and to give the surgeon an idea of how big an area must be removed or which chemotherapies are available. The biopsy after surgery tells us if the edges are free of cancer cells and how aggressive (how likely it is to recur or spread to liver and lung) the tumor is.

Another case is a 2-year-old Pit Bull with a one-inch mass in the skin that is firm to the touch but still can be moved around. Cytology tells us that it is a mast cell tumor and may be very aggressive.

Picture an egg in a frying pan. The yoke sticks up and represents the mass you feel, the white around it is the area of spread and the little fingers of white that run off are the new areas of invasion. The surgeon must know how big an area (how much of the white and little fingers spreading around it) he needs to remove.

Usually we try to go one-inch all around the yoke and take an area below the growth where it may have spread. Now we have a big six-inch hole to close. The biopsy will tell us if we got it all at the site. There is the possibility that it has spread to liver or lung before the surgery.

Many times, follow-up chemo is recommended. It may be a few pills or full on intravenous treatments every few weeks for a few months. The goal is to cure or prolong life in a compassionate way.

We hope that you never have to face these problems, but if you do, we are here to help you.